That hiss you hear is my head imploding slowly

Officially, Immortal is out at the end of this week.  I say “officially” only because there are things that have to get done in a certain order for the release to actually happen entirely on schedule, and since they haven’t all happened yet, my cynical “I’ve been waiting six years for this” self is going to remain skeptical but optimistic.  Not to say the book isn’t going to be in your hands soon– it certainly is– just that if that doesn’t happen as of 10/1/10 + x days for delivery, it’s only because we live in an imperfect world that may hate me.

All right, it doesn’t hate me.  That’s Monday talking.

One of the fun things about promoting a book with an immortal narrator for five solid months is I get some fairly regular questions along the lines of “hey, have you ever read _____” where some immortal character or other is inserted.  I’m not sure why this happens, because while the questioner may be thinking “hey, one of my favorite characters is immortal and I’d love to talk to you about him” but what I’m hearing is “hey, do you have any idea how unoriginal your story is?”

So for the record, the immortals I am familiar with, off the top of my head:

–The immortals from Neil Gaiman‘s Sandman

–The Man Who Fell To Earth

I’m excluding vampires from the list despite my familiarity with a large number of them, because Adam isn’t a vampire.

Oh.  But I am forgetting one thing.

The Man From Earth

Funny story.  In 2007, I was a volunteer for the Rhode Island International Film Festival, concerning myself more or less entirely with their screenwriting awards and conferences.  My “in” was friend Jenn, a fellow screenwriter who happened to be running the screenplay stuff for RIIFF.

At the end of my official duties and with time to kill, Jenn and I decided to take in one of the roughly 10,000,000 movies RIIFF screens during the week of the festival, and so we walked across the urban blight that is Providence until we reached the movie theater airing the science fiction slate of films.  We entered roughly ten minutes into the “debut” airing of The Man From Earth.  Roughly ten minutes after that, Jenn turned to me and asked, “did you know they already made Immortal into a movie?”

I think that’s when I started crying.

For the record, The Man From Earth is the closest thing I have seen to the premise of Immortal.  And they’re still very, very different.  How different?  Well, if I tell you that I’ll either spoil the plot of the book, or the movie, so let’s just take my word for it until you get a chance to compare them for yourself

And on that note: 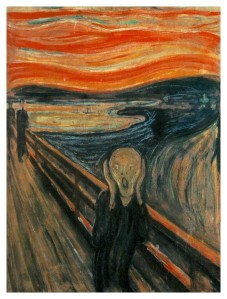