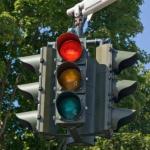 If you ask a biker– any city biker– about bicycle safety and traffic laws, they will all start with the same line: “of course I stop for red lights, but…”  What will usually follow is a complaint about the many cyclists they’ve seen that were acting stupid, or reckless.  And if you ask me I’ll probably tell you the same thing.

But here’s the truth: We all run red lights.  All the time.  Just not all of them.

On my way home last night– a 17.5 mile trip that takes about 90 minutes– I counted the number of times I technically violated a traffic law by traveling past a red light or through a stop sign, and lost count after fifteen.

And I’m a safe biker.

Now, when you tell someone “Oh, I ran a red light” what the person you’re talking to is thinking of is probably a busy X intersection where running a light means careening through two-way traffic.  To bike through that kind of light one would have to force cars to stop for you, which is dangerous and stupid.  But those aren’t the kind of intersections I’m talking about when I say “I run red lights.”  These are:

I slow down at each of these intersections, and stop if I need to in order to assess the traffic flow.  And then I go if the way is clear, whether the light is red or not.

And any biker that tells you they don’t do this is either lying to you or hasn’t been biking long enough to figure this out.

But there are laws!

I have heard much hue and modest amounts of cry lately over bikes in the city, with the most heinous being this Boston.com piece. (*See footnote)  One thing most everyone seems to agree on is bikers should be forced to follow traffic laws.

Well, this is a stupid point.  Here are plenty of reasons it’s stupid:

Most of the time I am harassed when I’m riding, it’s while I have right of way and am not doing anything illegal whatsoever.  Last week I had a driver turning left in front of me lean on her horn and scream because I zoomed past her and she had to stop.  But I was going through a green light at the time, it’s just there were no cars going through it with me.

A few weeks before that I got stuck behind a car that was trying to get around a parked city bus.  The guy went extra-super-slow because he thought he was going to get clipped by the people speeding past him (in cars) on his left, so he took forever to get past the corner of the bus.  Once we both got past the bus the car behind us leaned on his horn and started pointing fingers at me.  Why?  I don’t know; he apparently didn’t like being behind me, even though it was the car in front of both of us that caused the slowdown.

And just last night, I “cut off” a car turning right.  Except I didn’t do anything of the sort.  He was going straight and decided to turn right without bothering to use his turn signal or checking his mirror to see if I was there.  I sped up to get past him before he completed the turn– my other option was to skid, which is what happens when you try to go from 20 MPH to 0 MPH immediately on a bike–forcing him to slam on his brakes and honk.  This was not my fault.

I have hit intersections just as lights turned green and gotten honked at by the cars at the head of the traffic who were startled when I went past them.  I have had people stop their cars dead when turning left after discovering I was on their right and turning left with them.  I have had cars wait until the traffic was clear on the other side of the street so they could give me a six foot berth before passing.

I am a driver too, and I grant that it’s startling to have a bike suddenly fly past the right (or left) side of the car when I didn’t know they were there.  But that isn’t the biker’s fault.  It’s mine, for not expecting them or looking for them.

Yes, I agree there are more bikes than there used to be, and I have lost chances to turn and missed green lights because they were in front of me.  But as a wise bumper sticker maker once wrote “Bikes aren’t causing traffic.  Bikes ARE traffic.”

*Footnote: it’s possible the writer of this piece was shooting for some sort of Swiftian satire, which would mean we don’t have to take anything he wrote seriously.  But to be Swiftian it would have had to have actually been in favor of bikes in the city, and it is clearly not.  Also, this writer isn’t nearly as talented .  He may not believe what he wrote, but he knew fully well it would resonate with some portion of The Common Man, because if history has taught us nothing else, it is that, by and large, The Common Man is a fucking idiot.